Lyrette Physiotherapy is owned and operated by an experienced husband and wife team. We are dedicated to offering the best client care for a variety of physiotherapy needs.

Lyrette Physiotherapy prides itself on client advocacy, as each client has the right to quality care in all aspects of health and wellness.

In addition to private physiotherapy services, Lyrette Physiotherapy also holds a partnership with the North East Local Integration Health Network (NE LHIN) to provide home care physiotherapy services within the Northeastern Ontario District. Some of the areas to which we deliver service, but is not limited to, include Timmins, Cochrane, Iroquois Falls, and Kirkland Lake. Inquire with your health care practitioner to see if you qualify for health benefits through the NE LHIN.

Visit us at one of our two physical clinic locations, in both Cochrane, as well as Kirkland Lake, Ontario. Access our contact page for more clinic details. 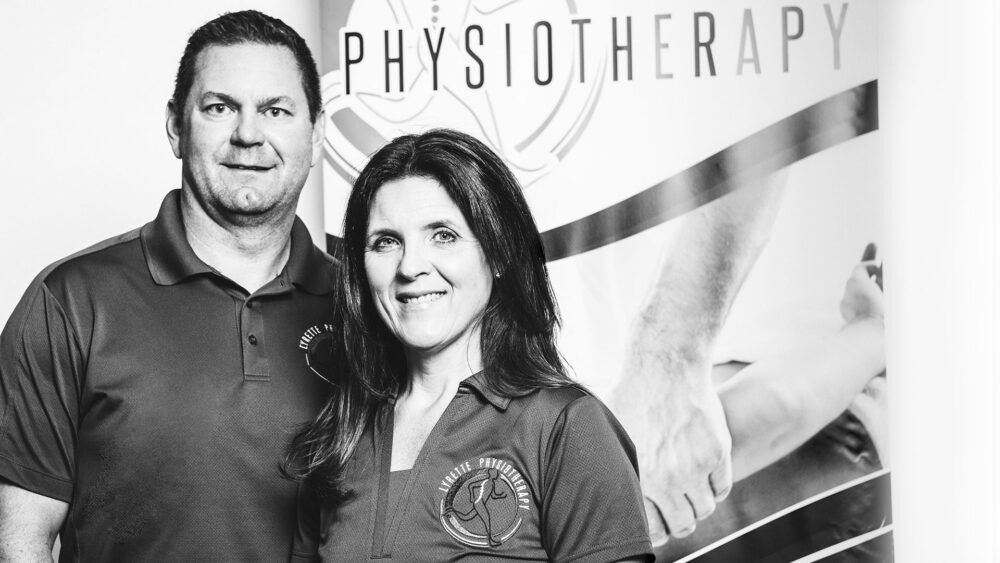 Lyrette Physiotherapy prides itself on client advocacy, as each client has the right to quality care in all aspects of health and wellness.

In addition to private physiotherapy services, Lyrette Physiotherapy also holds a partnership with the North East Local Integration Health Network (NE LHIN) to provide home care physiotherapy services within the Northeastern Ontario District. Some of the areas to which we deliver service, but is not limited to, include Timmins, Cochrane, Iroquois Falls, and Kirkland Lake. Inquire with your health care practitioner to see if you qualify for health benefits through the NE LHIN.

Visit us at one of our two physical clinic locations, in both Cochrane, as well as Kirkland Lake, Ontario. Access our contact page for more clinic details.

Lyse, native to Alexandria, a small town in Eastern Ontario, attended the University of Ottawa, where she graduated in 1996 with a Bachelors of Physiotherapy. It was in Ottawa that she met her husband Robin, a fellow physiotherapist. Upon graduation, Lyse and Robin packed up and headed north to his hometown of Timmins. Lyse spent her first 15 years of employment at the Cochrane Temiskaming Children’s Treatment Centre in Timmins where she gained extensive knowledge and expertise in the field of Paediatrics. Lyse progressed to then open a private practice in 2012.

Initially, her business held a contract with PhysioMed Peaks where she became the lead physiotherapist in 6 Long Term Care facilities in the surrounding area and also serviced the Home and Community Care population in the Cochrane District. During this time, she continued to expand her knowledge in the Geriatrics, Neurology, Orthopaedics, and Cardio Respiratory fields. She and her husband, Robin, consolidated in business in 2017 and have since expanded their independent practice by opening two private physiotherapy clinics. Alongside their private clinics, they continue to serve the population in Home and Community Care settings.

Lyse is a proud mother of two beautiful children. She is a passionate and dedicated physiotherapist that will stop at nothing to offer the best quality of care to her patients. She is a strong believer and advocate of the importance of maintaining an active lifestyle and listening your own body’s limitations, modifying when needed.

Throughout his career, Rob ensured to broaden his expertise through continued education, including certifications in acupuncture and manipulation.

Rob thrives in Northern Ontario as he is quite the avid outdoorsman – hunting, fishing, and camping every chance he gets!

Leigh-Anne graduated in 2003 from the University of Ottawa with a Bachelor of Science degree in Human Kinetics, followed by a post-graduate Masters of Physical Therapy degree at the University of Toronto in 2007. Since graduating in 2007, Leigh-Anne has worked in both inpatient and outpatient settings gaining extensive knowledge and experience in orthopedic, cardiac, neurological and developmental physiotherapy in both adults and pediatrics.

Leigh-Anne has taken a variety of courses since graduating including certificates in the physiotherapy management of concussion, vestibular rehabilitation, manual therapy, taping, kinesiotaping, and pediatric sensory motor integration.

She is passionate about physical therapy and thoroughly enjoys partnering with clients to maximize independence.

Melanie has been practicing physiotherapy for 15+ years and has experience working in the areas of pediatrics, orthopedics and diabetes care. Physical fitness has always been an integral part of her life and one of her passions includes educating about the importance and health benefits of physical activity and exercise.

In addition to working part time as a physiotherapist, she teaches dance to children and also teaches various fitness classes including barre fitness classes.

Vicki completed a kinesiology degree at McMaster University and then went on to complete her masters in physiotherapy from Queens University. After graduating in 2009, she went on to work in rural northern Ontario, working in both hospitals and private clinic. She took her pelvic floor certification in 2017 and has since furthered her pelvic health training with a focus on athletes, pelvic pain and postpartum moms.

A member of the first graduating class with a Bachelors of Physiotherapy from University of Ottawa, Joanne has been practicing as a Registered Physiotherapist since 1990. A proud mother of three boys, Joanne is originally from Timmins, ON and is bilingual, providing her the ability to offer diversified care.

Joanne’s experience mainly lies in geriatric rehabilitation, but she has a special interest in pelvic and women’s health. As a fantastic asset to our team, Joanne specializes in our Assistive Devices Program. Full-time, Joanne keeps busy as a Registered Physiotherapist at our local hospital.

Taylor’s exposure to health and the human body throughout high school piqued her interest in functional movement and exercise-based rehabilitation. She went on to graduate from Wilfrid Laurier University with an Honours Bachelor of Kinesiology and minor in Psychology.

Taylor strongly believes in taking a comprehensive approach when it comes to rehabilitative mechanisms of human movement. She enjoys working with individuals of various ages, backgrounds and injuries. Returning home to Kirkland Lake, she continued her passion for health by providing quality care as a Registered Kinesiologist with Lyrette Physiotherapy. As a devoted lifelong learner in the health & rehabilitative field, Taylor looks forward to expanding her ability to improve movement, performance and the well-being of others in her community.

In her downtime, Taylor enjoys spending time with family and friends, and relishing the lake life with her two Goldendoodle pups.

Brad has been a physiotherapist now for five years. He completed an undergraduate bachelor’s degree in biomedical science at the University of Ottawa in 2012 and completed his master’s degree in physiotherapy from the University of Toronto in 2015. Brad works full time at the hospital dealing with both acute care and rehab settings. He began his casual home care work in 2017 in order to assist with the continuum of care.

Brad is also ADP licensed for walker assessments. He thoroughly enjoys working with the elderly as well as the variety of populations requiring physiotherapy in the hospital as well as the home care setting.

Brad is originally from Timmins and continues to work in the Timmins/Porcupine area. He is a saxophonist on the side and has played multiple gigs in the community both in his teenage years and recently with the Timmins All-Star Big Band. Being a northerner at heart, he also thoroughly enjoys adventuring in the bush either by hiking, pedal biking or ATVing. There’s nothing quite like the relaxing nature of the Northern Ontario lifestyle. Brad looks forward to serving you in the community!

In 2006, Lori graduated from the Social Service Worker program from Northern College and has since obtained her certification as a Certified Myomassology Practitioner (CMP) in 2015.

For over twelve years, Lori has had the fortunate opportunity of working in the physiotherapy and rehabilitation sector, both in a community based and long-term care setting. Her extensive experience as a physiotherapy assistant in the field of geriatrics, has provided her with a deep sense of purpose, as well as allowed her the opportunity to contribute to improving the quality of life for the individuals she has had the pleasure to work with.

The ability to exude compassion, dedication, and perseverance are some of the many qualities she can account for and demonstrate in this field.

Melanie was born and raised in the small town of Cochrane, Ontario. After graduating as a Physiotherapist Assistant in 2014, Melanie was proud to be able to return to her home town to assist all the wonderful people with their physiotherapy and rehabilitation needs.

Melanie’s passion for physical activity, health and caring for people are perfectly combined for her through this profession.

Sonja graduated from Sault College with a diploma in Fitness and Health Promotion in 2017. In 2019, she graduated from Lake Superior State University with a Bachelor’s of Science in Kinesiology.

Sonja is originally from Northern Ontario, so she chose to attend schools and obtain employment that would allow her to stay within the north.

Brigitte is a bilingual Physiotherapy Assistant with more than 14 years of experience. In 2005 she completed her schooling at College Boreal in Sudbury and received her Physiotherapy Assistant diploma. Brigitte has worked at various places such as Armstrong Physiotherapy, the Golden Manor, Chateau Georgian, and Bayshore. She has recently joined the Lyrette Physiotherapy team to continue her passion for helping clients in the community in increasing their strength and mobility.

Brigitte is currently living in Porcupine with her husband and two boys. In her spare time, she loves exercising and enjoying the great outdoors with her family and friends.

Chelsea is also a proud mother of two children. Her interests involve as much of the outdoor life as possible with the family on her spare time.

Robyn-Lee is our fantastic and diversified administrative assistant at our Kirkland Lake Physiotherapy clinic located in the Kirkland and District Hospital. Robyn-Lee and her family has recently made Kirkland Lake their home after moving from Fort McMurray, Alberta.

While living in Alberta she spent the last ten years working in the Oil Sands. Since moving to Kirkland Lake, Robyn-Lee has made the decision to step back from working long hours and shift work and was given the opportunity to join our wonderful team, which allowed her to spend more time with her family and serve the beautiful community of Kirkland Lake.

Robyn-Lee has expressed that she has met some amazing people through our clinic and looks forward to continuing to be part of this team and serving our community.

Chantal recently returned to her hometown of Timmins and joined the team at Lyrette Physiotherapy as an Administrative Assistant. For the past 25 years she has lived in various cities across the United States.

Chantal graduated from the University of Ottawa with a Degree in Linguistics. She also graduated from Sanford Brown Institute with a certification in Surgical Technology.

Chantal has traveled the world extensively and is extremely proud of her two sons, Alexandre and Zachary. Throughout her life, Chantal has focused on volunteering in order to help out as much as possible. She is health conscious and enjoys exercising and all outdoor activities in her spare time.